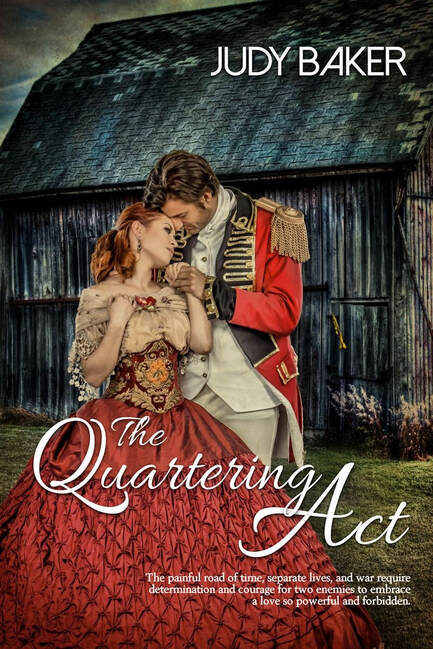 The painful road of time, separate lives, and war require determination and courage for two enemies to embrace a love so powerful and forbidden.
A Revolutionary War Romance
​The Quartering Act

Katherine Heaton, a young patriot woman, stares into the eyes of the Redcoat officer standing over her father’s lifeless body. Stunned at what she has just witnessed, there is nothing she can do when the soldiers haul her brother away for hanging a British Stamp Agent. Devoted to her brother, and the cause, she will help him fight for independence.

Captain Jeremy Burke, officer in the King’s army, arrives in the New World and discovers the colonies have an elegant simplicity that surprises him, especially the beautiful Heaton woman. He has never had a problem with self-discipline, until now.

​The painful road of time, separate lives, and war require determination and courage for two enemies to embrace a love so powerful and forbidden.
Review:
4 Books - The Long and the Short of It: "Ms. Baker does a masterful job weaving in the major conflicts around Boston so familiar from our history books. The Quartering Act is an excellent read. I hope that if you are into reading Regencies, you will take heart and pick up this story. I'd like to say it's a great addition to any library and a new American Empire drama. Many thanks to Ms. Baker for an enjoyable book." Reviewed by Bluebell of the Long and the Short of It.